I ordered a whole bunch of striping tapes from Amazon for $2.99 and I wanted to try my hand at striping. Another exciting set of colors was the OPI Euro central set for 2013. 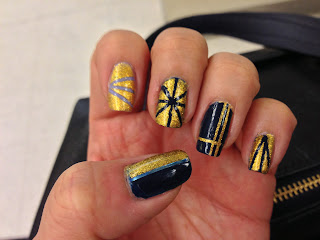 My base coat on all my nails was I Saw...U Saw....We Saw...Warsaw except my pointer which I based with You're such a Budapest. Added the stripes - which I have to say you should have some sewing scissors on hand to make cutting more refined. Painted the top coat with Oy-Another Polish Joke and while my polish was still wet, lifted the tape carefully.  I left one blue tape on my thumb just to see what it would look like. 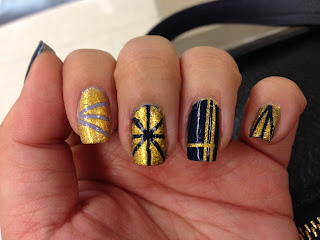